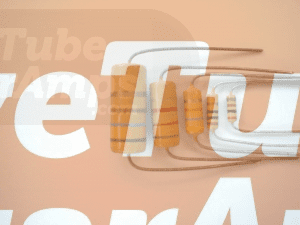 This a longer than usual article talking about the different type of resistors. Resistor technology has changed over the decades . What is common is that many types change their values over time.  They usually go high in value and with certain types heat makes the problem worse. Some  create noise.  The overall result is that the values can change so much that the amp stops dead in its tracks. Other symptoms can be horrible sounding distortion . Another effect is the output valves getting really hot and the bias adjustment will not reduce the current to anything other than setting your output valves to what feels like 300C and guaranteed destruction.

When working on old amps you have the soldering iron on the components, I have seen the use of a solder send what was a resistor withing tolerance have its value rocket after having done some soldering.  So, check the value after the solder work is done. Better still just replace parts which are common to the solder joint

Here is a summary of common resistor types that can be found in hifi and musical instrument amps.

The picture above shows   pair of carbon composition resistors from the 1950s with visible end caps under the cement and were much used in  equipment including early guitar amps. Those shown are, left to right, 1 W: 26 mm x 7.2 mm; 0.5 W: 17 mm x 3.8 mm. A 2 W version was also available. Overall, these resistors seem more stable over time than their younger smooth-sided moulded brothers.

Now we see three ceramic-bodied carbon composition resistors (left to right, 1 W: 17.5 mm x 5.8 mm; 2 x 0.5 W: 11.5 mm x 5.8 mm), manufactured in the 1950s and well into the 1960s; these were commercial units often with poor tolerances, typically  20% even when new and usually ±10% at best. They tend to wander up in value . They are still serviceable as long as the risks are appreciated. If attempting full restoration of a vintage amp  to be placed in service, why risk its specification being changed as a result of poor-quality components?. Be aware that aged high value carbon composition resistors in the anode load of a triode or pentode audio amplifier can produce very high levels of noise with, oddly, the value of 220 kΩ  being the worst value.  I have seen these go completely open circuit in a VOX Ac30

Cracked carbon film resistors made an appearance in the late 1950s, first as black and pink coloured types in various physical sizes manufactured by STC Painton and  Towcester, UK. Unfortunately with time they go out of tolerance . These were the original film resistors made by cracking a hydrocarbon in the absence of oxygen onto ceramic rods. They were the preferred choice for high ohmic value anode load resistors in hi-fi preamplifiers  and guitar ampls in the 1950s.

Another brand of carbon film resistors commonly seen is that made in the 1970s by the then Yugoslavian company Iskra, wholesaled in the UK by Guest Electronics in Surrey and retailed by many including Electrovalue Ltd. These are shown below:

This article and pictures are based on  information that was first published in Vintage Military Radio Society’s Signal magazine which  was written by D Porter G4OYX and Peter Chadwick G3RZP. It is reproduced with permission and I am very grateful for their help.