This is essentially a solid state amp so before I get shot down in flames, my defence is that there is one valve in this amp which is there to warm up the sound.

This Ashdown Evo II 300  is a 300 watt amp with twin 12 inch speakers. It is very well constructed with great access to the key parts of the amp

This Ashdown Evo II 300 was distorting and sounded terrible. When the amp arrived it was initially working ok but when I got it on the bench it sounded awful.

I opened the amp and with it sounding so bad I suspected there was an issue with the power amplifier section power supply. There is the power amp board and this also contains the power supply for the output. It is + and – 70 volts.  Warning if you open a Ashdown Evo II 300 the heatsinks are live at +/- 70 volts. Don’t touch them !!!

I measured the supplies and they started out at +/- 45 volts and then the positive supply collapsed completely.  This caused a resistor to burn out.  What was supposed to be zero volts line was pulled to -45 volts. 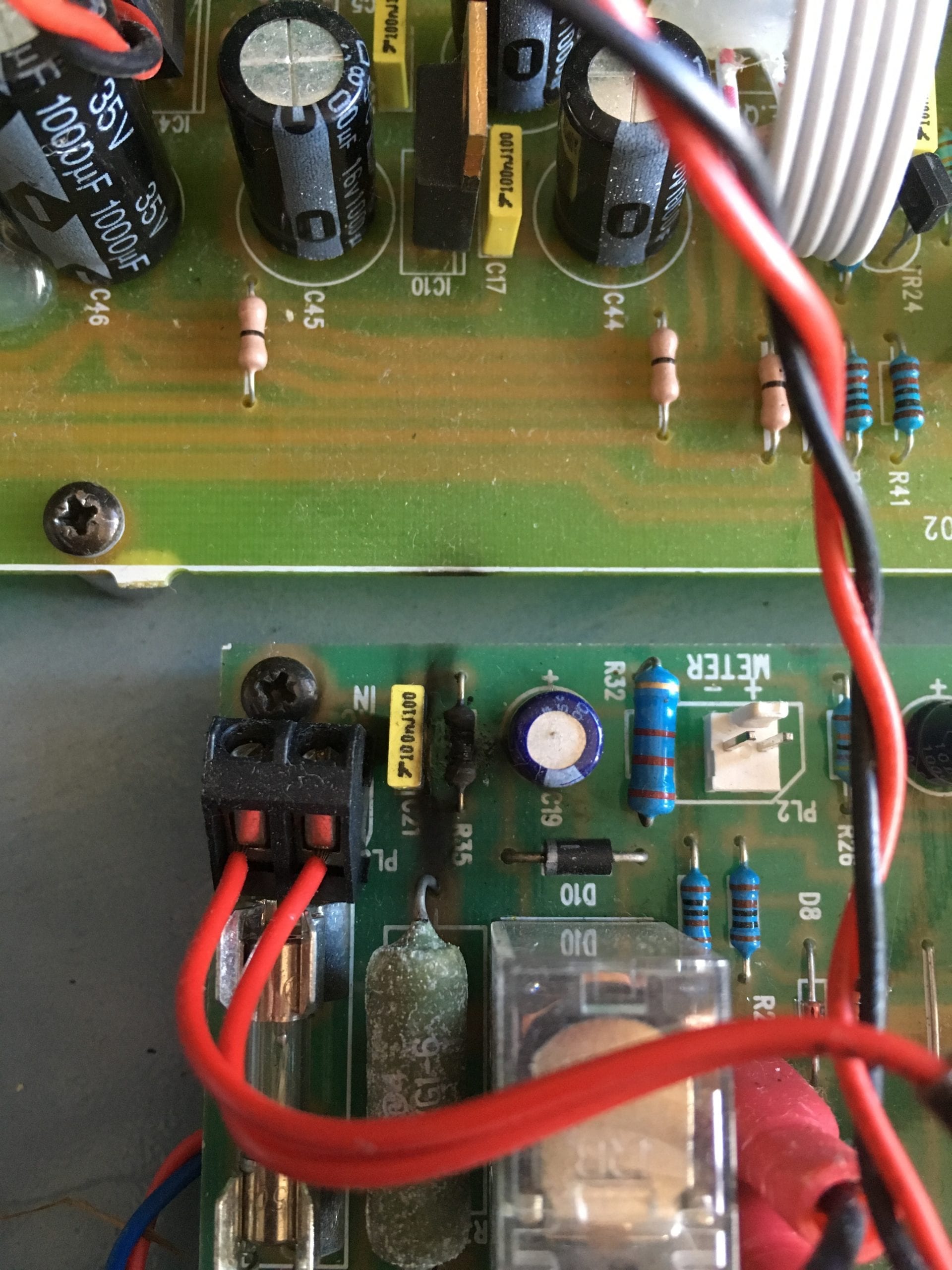 Burned Out resistor next to the red wires

the amp dates from 2003 and so the components are old. I removed the two 4700uF 100 volt capacitors and tested them to find one totally dead. I replaced them both with brand new ones.

I replaced the burned out 10K resistor and the power supply was back at +/- 70 volts . A result.

I checked the very lonely Electron Harmonix 12AX7 sitting in the amp and it was over 10 years old.  It was working but with very low emission. It was worn out. I replaced it with a new EH 12AX7 and now the “crunch” returned when adjusting the mix of the valve signal. Many folks forget to replace the 12AX7 in their Vox Valvetronix, Marshall ADT series and Ashdown amps. It does make a difference if you replace it every 2-4 years. a new 12AX7 brings the warmth of the amp back.

Some of these amp designs will still work without the valve so if the valve is dead, you will only notice as the warmth has gone.

This amp has a fan to keep the output transistor heatsinks cool. Both the fan and the heatsinks were choked with dust and these were cleaned out. The amp will run cooler now that 14 years of dust has gone!

The amp was PAT tested and soak tested. The owner was really happy as he was thinking he might need to buy a new amp.

So try and check if the amp you are looking to buy has bipolar transistors.

Many thanks to Ashdown who were very helpful in supplying info I needed. They are a really good bunch of guys. Nice quality built amps. Click here and have a look at these long lasting amps