Have you ever wondered why valves wear out or why they dont last as long as solid state stuff?

Why do the big amp manufacturers give you three years warranty on the amp and 90 days on the valves?

Valves are very old technology.  The popular 6L6 output valve came to market in 1937 and our little friend the 12AX7 ( ECC83) was first introduced by RCA way back in 1947. The EL34 so favoured by Marshall is a real newcomer – introduced in the early 1950’s!

Here is a summary of common valve faults what to look for and a bit of explanation on “why?”

There is a real temptation to get lost in a load of physics and chemistry ( yawn! ) so this blog is focused on the ” good to know” info for musicians. So apologies to the super tech folks as I am just giving a flavour. This is hopefully helpful for you to decide when to change valves or figure out what is up with your amp.

We need to cover some simple tech stuff first, stick with it as its worth reading! 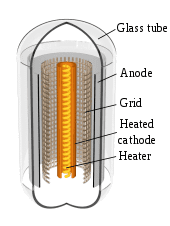 Right in the middle there is a heater which is just like a light bulb. It is powered by usually 12 or 6 volts AC from the mains transformer. It is surrounded by a tube which is the cathode . You can see the end of the heater poking out of the cathode when a valve is on.  The heater is there to get the cathode really hot. The cathode is the bit that emits the electrons because it is coated in special oxides that emit the electrons. The anode, sometimes called the plate, has a high voltage applied and this draws the electrons and so current flows. The grid is metal lattice between the cathode and anode which controls the flow of current.  A minus voltage is on the grid to control the current flow – like a magnet. Electrons are negative and so putting a minus voltage on the grid causes some of the electrons to be repelled just like putting the two north poles of a magnet nest to each other.

The glass envelope is a vacuum.

So what do I need to watch for with my valve amp and make sure I keep costs to a minimum?

The heater can blow just like a light bulb and then you have an ex-valve.  No heat = no tunes

This is one of the most common valve faults. A valve is a mechanical construction.  If the valve is subjected to sound then the grid can vibrate and this variation ends up making the valve a microphone.  All valves are microphonic. some start from a lower point than others. As the valve ages and with heating and cooling down the metal bits in the valve work loose.  The valve becomes more microphonic. You can check them in your amp by tapping them all GENTLY with a pencil. The bad one will show up as a loud thump in the speaker. Combo amps are more prone to this because the valves are picking up all your nice notes and the bass notes play merry hell shaking them up. The Russian factory maintains that their 12AX7 / ECC83 with the lowest microphonics is the Sovtek 12AX7WC. It is ruggedised which means designed to stand up to more vibrations.

The insulation between the different metal components can start to break down over time. In the worst case, you have total short circuit and the internal and external fuses blow in your amp.  There is an in-between stage where the insulation is getting weak and so the cathode picks up the AC mains from the AC powered heaters.  You will hear a loud mains hum from your amp. You can find this in both the pre-amp valves output valves and the rectifier. It is age related,

With the insulation breaking down it can cause tiny little currents to flow between the various metal structures. This shows up as noise on the output . Pre-amp valves can make a continuous noise. I once had the reverb driver valve do this in my Deluxe Reverb.  The reverb sounded like thunder rumbling in the distance. I can think of a couple of songs where this would be really effective, however, not good for most music so the offender was replace. I used a ruggedised Tung Sol 12AT7W as a reliable replacement.

Output valves tend to randomly sputter when the insulation is starting to fail.   You will hear this especially when they warm up.  Then it will disappear but then come back occasionally at random. It will never go away.  If you want to make sure your local amp tech is having a good standard of living then I recommend you dont take this as a warning sign.  The next stage is that  one day you switch on and the fuses are all blown. The amp is dead.  If you are lucky just replacing the output valves and the fuses will get you back noodling.   Sometimes though,  the grid stopper resistors get burned out and the tracks get blown off your printed circuit board. Your amp tech will love you for this !

If you look at one of your valves you will see nice shiny silvering on the glass of your valve. This is called the “getter”. It is there to “get” the excess gas when the valve heats up. If a valve gets a gas leak the getter will capture the gas ( if it is a slow leak)  and slowly turn white as the “getter” chemical oxidises. If your amp dies on you and you see a valve with a white coating the technical term is “knackered”  as it has a gas leak and all the vacuum has gone.  The leak usually happens where the connection come out of the glass.  Another reason is when the amp is dropped out the back of a car/van/truck.

I snapped the top off an EL84 to make a BIG gas leak and you can clearly see the “getter” has gone white on the right hand side. A health vale is on the left 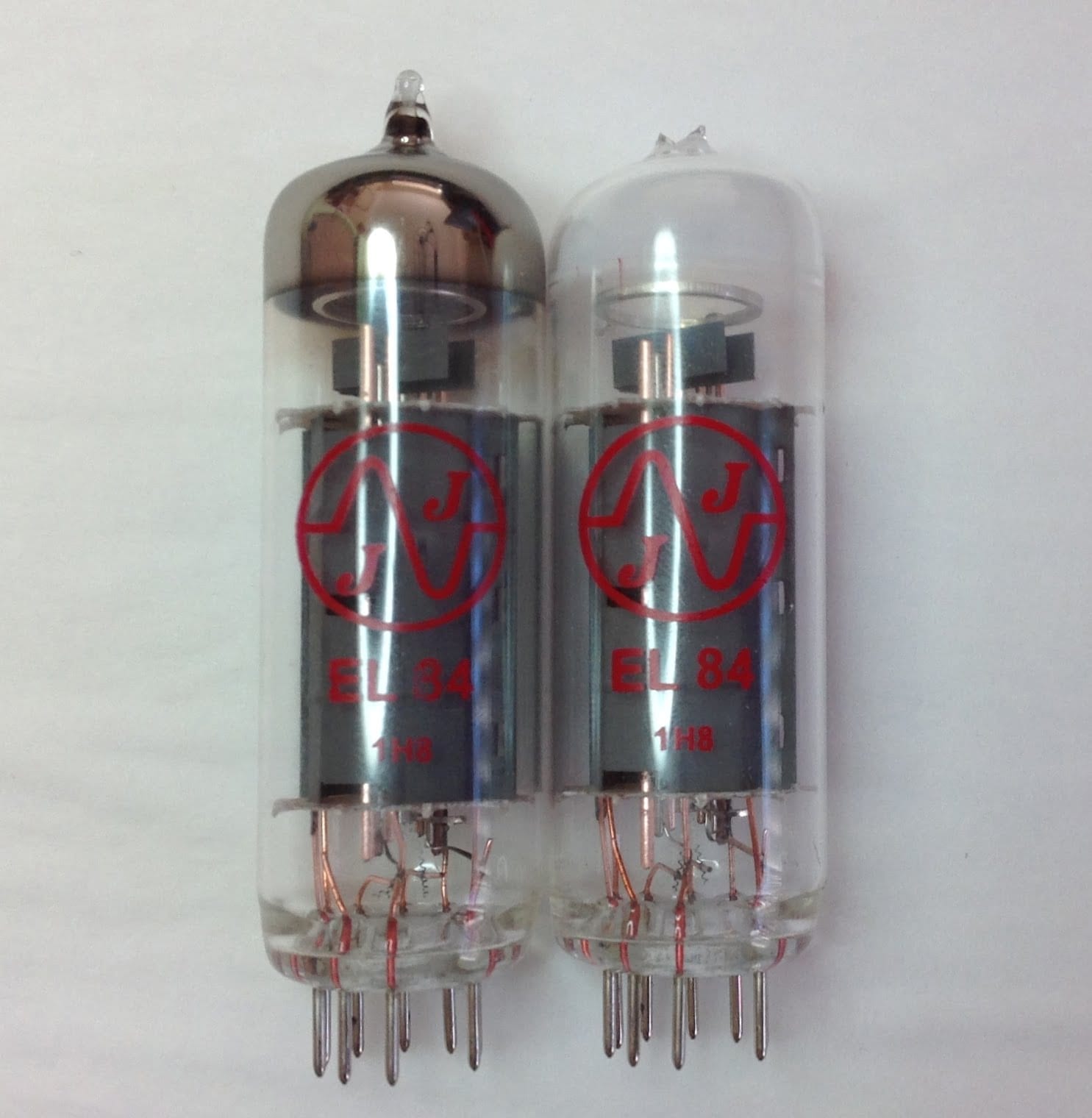 We test all our valves because we have seen valves with a very slow gas leak  and when they are on the tester you can watch the silver turn to white as the valve warms up over 10 minutes. Our testers do gas leak tests.

This cannot be classed in valve faults but is inevitable.

Earlier, I mentioned that the cathode is coated in various complex oxide combinations so that the electrons are emitted when it is heated up.   Over time this material becomes exhausted. It has n more electrons to give !  There is also an effect called cathode poisoning.  Oxygen wrecks the cathode . Even with the getter , oxygen is still present in the valve.  No vacuum is 100% and so there is still a tiny bit of residual gas in the valve. These attack the cathode and reduce its efficiency.  Its not the age of the valve that causes the wearing out it is the time operating at high temperature. In other words, it is the time you use the amp for. The standby switch makes no difference because the heaters are still running in your amp and cooking the cathodes. The cathode coating overall just looses its ability to emit electrons.  You can tell this is happening because the amp looses its punch and sounds duller.  When this happens its time visit our store and buy some some new valves.

You cannot build reliability into a piece of technology once its made. You can burn them in – you can freeze them – but they are still the same frail decades old technology from the early to mid 20th century. But they sound superb!

If you need advice on the best valves for your amp and your playing style just email us at info@valvetubeguitaramps.com 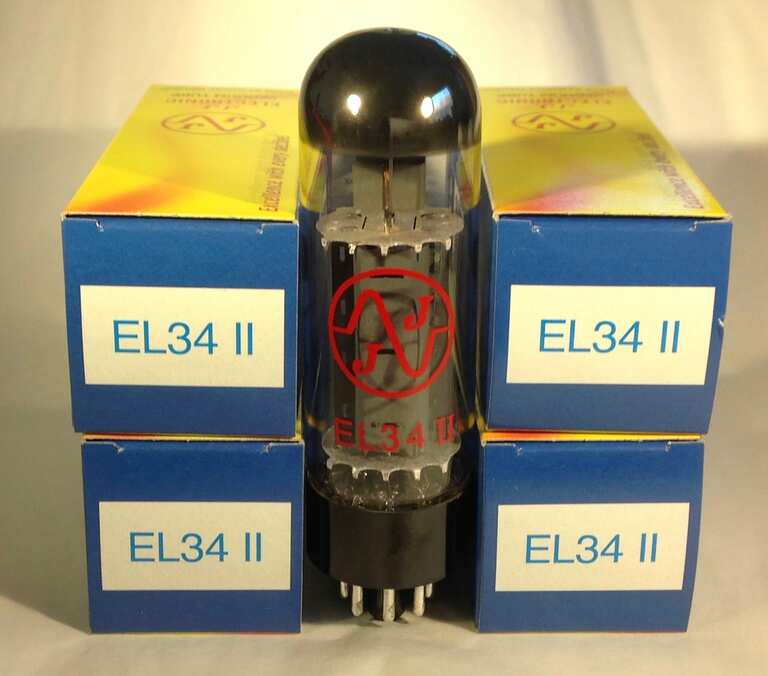 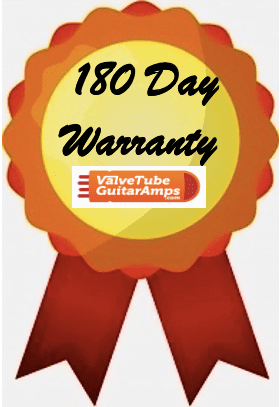 Price Based Country test mode enabled for testing United States (US). You should do tests on private browsing mode. Browse in private with Firefox, Chrome and Safari