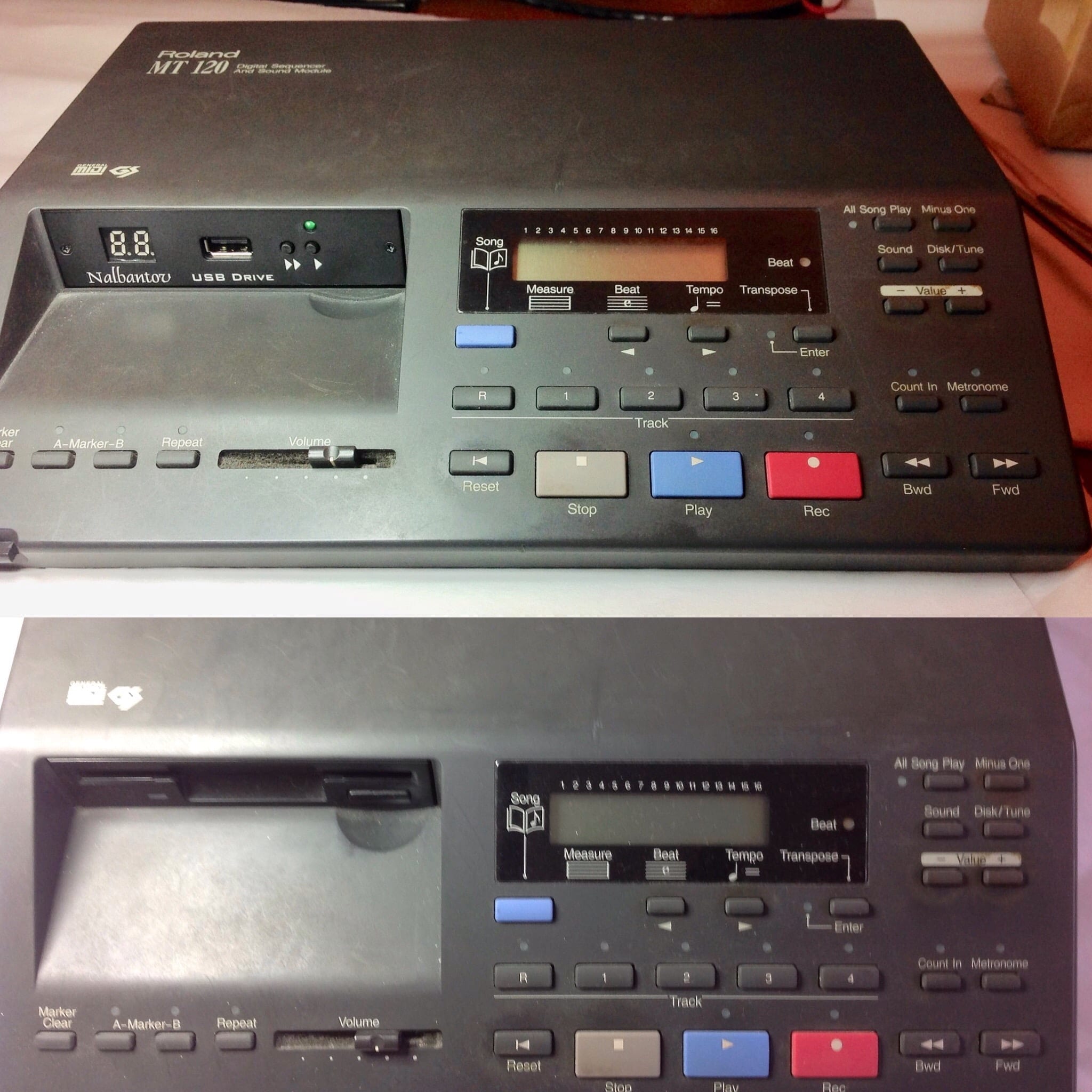 This post has nothing to do with valves or tubes but it is how to update your keyboard or midi player that currently has a floppy disk drive ( remember them ?). we have posted the because I am sure their are many folks out there that like to use Midi files  as a way of ” playing with a band” at home.  I try to play guitar and the Midi player keeps me motivated to play. I have a Roland MT120S player which proudly displays its 3.5 inch 1.44M floppy on the front of the case.

It was an expensive gadget 20 years ago and I wanted to update it withe the best solution being a USB stick.

Floppy Disk technology is widely out of date.  It is fragile and mechanical. I already replaced the floppy drive in the machine a few years back and I have little chance of picking up another drive if this one fails.

I found a little company in Bulgaria called Nalbatov.  They make floppy drive emulators. One 16G USB drive can hold  a 100 floppies of data which equates to about 2000 midi files. A big improvement on approx 20 songs per floppy disk. Many musical instrument floppy drives remained at 720K density long after the computer industry had moved to 1.44M double density drives. Probably because the older 720K drives were cheap as the drive makers were unloading them.  In the case of Roland the later units were 1.44M drives. This is probably true of all the instruments and players that were made in the 1990’s.

I ordered one and while mechanical fitting was fine, I found it powered up. It is a bit fiddly to fit as a lot of connectors have to be dis-engaged, but I knew what to expect having previously replaced the floppy drive.  When I inserted the USB stick it said “Improper Disk” . A bit fail,

I got onto their support email address and after about 10 days of shifting jumpers around and using different firmware, it eventually worked.

it is worth noting that the USB is pre-formatted to emulate 100 empty floppy disks.  The first version emulated 720K disks so a new file was needed to emulate 1.44M disks.

Roland uses their own proprietary  midi file name extensions and if you have disks that you saved on your Roland then you will need to request a specially formatted USB so that Roland .rsc .rsd and .mid files can be stored on the USB and played on your Roland.

The good new is that I now have a convenient midi player/recorder with no mechanical drives anymore and no need to carry around a zillion floppy disks.  I have now left the 20th century well behind.

You can check out Nalbatov on their webpage. I am sure there are many other applications to replace floppy drives in equipment that you want to keep using.

We do sell valves from Russia and Slovakia. And you can search in categories on the  website front page. We stock EHX, Genalex, JJ Electronic, Sovtek and Tung Sol.