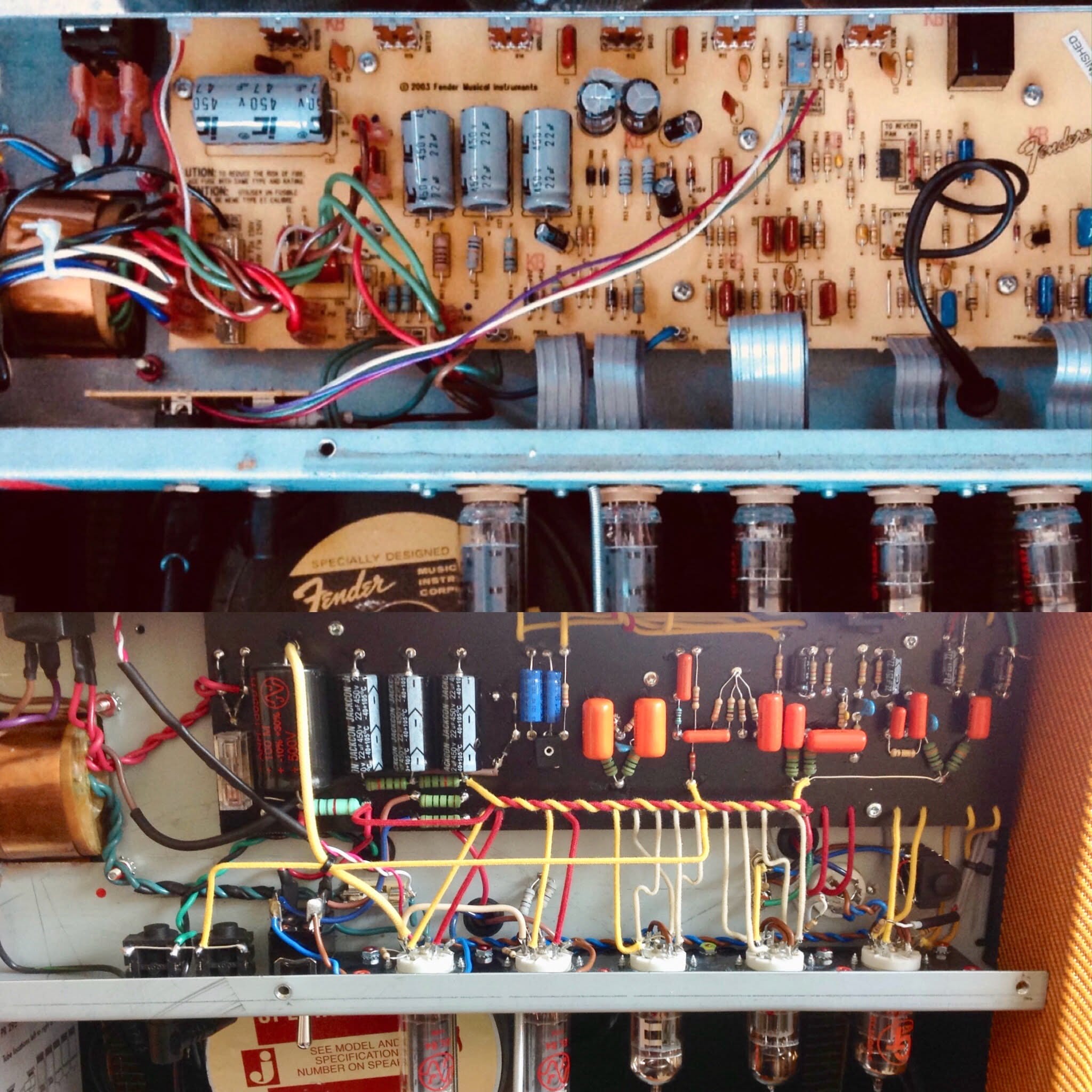 The Fender Blues Jr is a popular amp. It has enough power with 15 watts for small gigs and it does have the Fender tone with a hint of “Britishness” with the EL84 output valves. . The reverb circuitry is solid state and three 12AX7’s  for the pre-amp stages. The 15 watts comes from a pair of EL84’s  feeding into a 12 inch speaker.

The amp is constructed on printed circuit boards. One holds the solid state reverb circuitry, power supply and the valve circuits. The other smaller board holds the valve sockets is connected to the main board with ribbon cables. 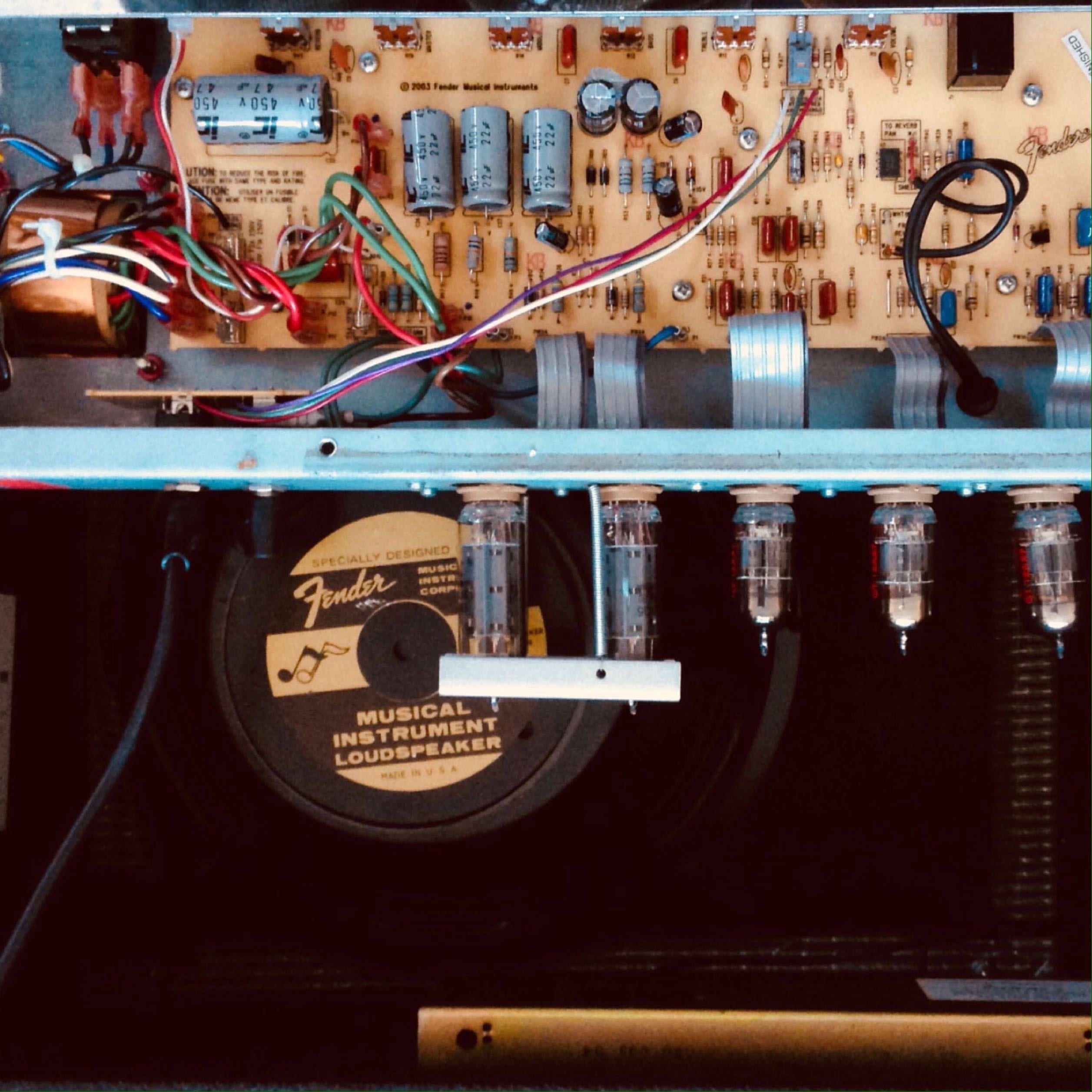 One arrived in the workshop for a service as the owner had picked it up on a good second hand deal. This one was fitted with an Eminence 12 inch speaker , made in the USA for Fender.

This amp was dead.  I checked the output valves on the AVO tester and the little Orange tester and found one completely dead.  The journey to Scarboorough had killed it as the amp did work before arriving. The output valves were six years old and on of them was the walking wounded. He sadly passed away.

The manufacturing date on the EL84’s was 2012.  They have had a good long life. I chose a  matched set which were close to the original good EL84.

Fender used “Groove Tubes” valves in this amp. However, you could clearly see the Sovtek branding which was still evident under the Groove tube logos. This amplifier uses fixed bias and it is important that “hot” EL84’s are avoided.

This is make sure the output valves do not have a short life and overheat.  A common modification to these amps is to modify the bias circuit so that the EL84 bias can be set. I fit valves with up to 22mA of current tested at 400 volts and -10 volts bias volts.

I tested the pre-amp valves and they were all still good and serviceable.   No need to replace the Sovtek 12AX7WA’s

The usual servicing elements were completed. Cleaning the pots, testing the electrolytic capacitors in the power supply, re-seating the connectors and of course PAT testing for safety.

You can see the grey coloured electrolytic capacitors in the picture. Unfortunately, I have seen a lot of issues with these leaking in Fender amps.  However, for now, these ones do not need replaced. They were fully to specification.

I tested the amp with a Fender USA Telecaster and the Blues Jr sound superb with a telly. It is now on soak test before the owner picks it up.

We stock three different valve kits  for this amp. One is JJ Electronic based. One is a kit with Sovtek valves exactly the same type  as the original valves when the amp was new and a Sovtek kit using the EL84M which gives more headroom.

I also had the opportunity to do a side by side comparison of the upgraded hand wired version and the standard amp doing a side by side test using the Telly and a Les Paul.

The hand wired conversion was done byRat Valve Amps in the UK. You can see the  Rat Valves Fender Blues Jr info here

Check out their website and see all the different amps that can be upgraded to hand wired amps.

Here is a picture of the inside of the Rat Valve Amps version of the amp in the picture below :- 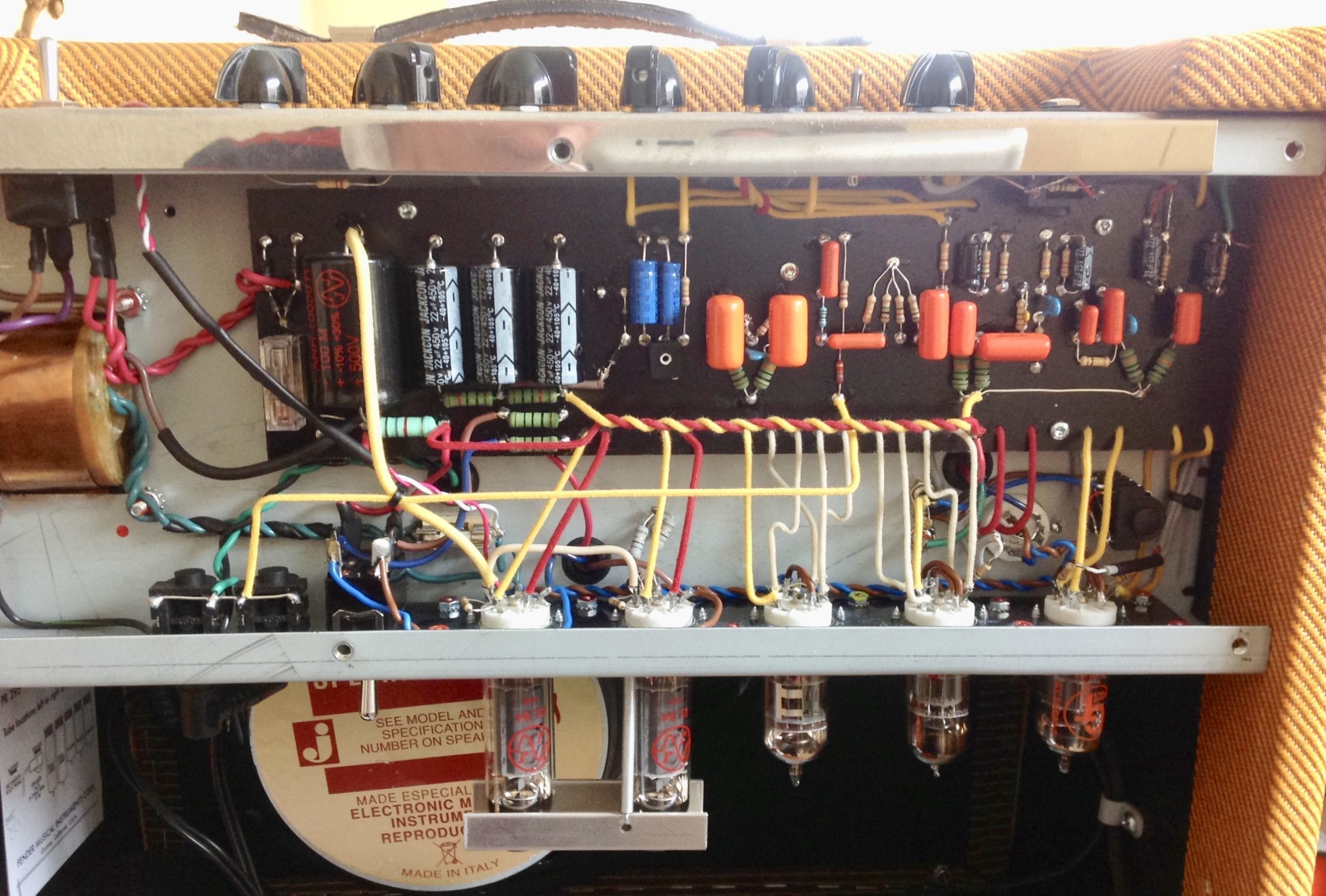 The workmanship is excellent and the component quality is top notch. The cables are al beautifully dressed.  The result is an amp with no hum and it is very quiet.  I took this picture of the inside when I had removed the back.  The owner wanted to alter the sound.  The tone circuits have been significantly modified and there is now a master and pre-amp volume control.  The owner is a melodic player and while his Strat sounded great his les Paul sounded mushy.  I reduced the gain and increased the headroom on the pre-amp stages by changing the pre-amp valves.

In this set up were a Groove Tubes ECC83S which is a standard JJ ECC83S, and two Gorrve Tubes 12AX7-R which are Sovtek 12Ax7WC’s.  I lowered the front end gain with a JJ 5751, and a 12AX7WA.  ( the Fender Blues Junior used the original groove Tubes which were Sovtek 12AX7WA ‘s) and a Sovtek 12AX7LPS in the phase splitter position because it has much more headroom than most other 12AX7 types.  The Sovtek EL84’s were fitted in place of the JJ EL84’s, following a listening test by the owner with his own lovely Les Paul.  The amp was now extremely controllable using the pre-amp volume control with the ability to control the point at which clipping ( distortion) came in.

The original valve lineup is certainly good for hard rock playing and if you want gentler control then this valve line up works really well in this lovely hand wired amp.

Here are links to the valves used:

As always feel free to ask any questions or if you need advice.